Historic Fortress and Lighthouse In Victoria

At the entrance of the Esquimalt Harbour lies Fort Rodd Hill – a decommissioned west coast artillery fortress. A visit here is straight out of a Nancy Drew novel with secret bunkers and British Columbia’s oldest permanent lighthouse. Fisgard Lighthouse is the perfect photo backdrop for your west coast adventure. Built by the British and automated in 1929, it is still operational today.

Gold was discovered in the Fraser Valley in 1858, which led to thousands of miners and prospectors descending on the area. The lighthouse was built as a safety measure after an abundance of shipwrecks along the coast, including areas within the Juan de Fuca Strait. The area has loosely been dubbed the “The Graveyard of the Pacific.”

Adults can tour the property for $8.50, and youths have free entry. Serving in active artillery defence from 1895 to 1956, Fort Rodd was declared a national historic site in 1958. Touring the property today gives the opportunity to see displays of cannons and guns upgraded during the 60 years of operations, including significant upgrades installed to help protect Canada from potential attacks during WWII. This is sure to catch the attention of the history buff in the family. During the summer months, costumed performers immerse visitors in the life of living at Fort Rodd and Fisgard Lighthouse – the many challenges the people of the fort faced and what was involved in defence of this beautiful western coastline. You’ll receive a small taste of what living in the trenches was like, along with the training and chores needed to keep the lighthouse running. You can also take self-guided audio tours as you walk the grounds and listen to accounts of life at the fort, including dialogue from an American spy and First Nations peoples.

Kids and adults alike can learn about the Southern Resident Killer Whales in the area. Bring your binoculars because the whales travel primarily through the Strait of Juan de Fuca at a distance from shore. Look for far-off spouts or dorsal fins. If you’re lucky, you could spot Southern Resident Killer Whales or Bigg’s (Transient) Killer Whales. Although they are found in the Strait of Juan de Fuca any time of year, they are occasionally seen in the summer at the mouth of the Esquimalt Harbour.

Parks Canada has included Fort Rodd Hill and Fisgard Lighthouse in the Red Chair Project. At the fort, you will notice three sets of red chairs placed in peaceful and scenic locations to immerse you in the landscape and put you in the heart of history. The lighthouse, once a beacon for the British Royal Navy Pacific Squadron, is now across from the base for the Royal Canadian Navy. The lighthouse is open to wander through the two floors of exhibits and learn about the history of this fantastic place.

Feeling extra adventurous? From May 1 to October 6, OTenTik Tents are available for overnight stays within the fort. Live within the fort from the comfort of a bed and experience something a little bit extra over the average visitor.

Just Down the Road:
Fort Rodd Hill is in close proximity to two other great stops. For an exceptional day, we suggest visiting Hatley Castle Gardens in the morning, then head to Esquimalt Lagoon. for a picnic or food truck and spend the afternoon at Fort Rodd Hill and Fisgard Lighthouse.

Are Dogs Allowed?
No pets, Pets are not permitted inside the national historic site, the visitor centre or historic buildings.

Is Fort Rodd Hill and Fisgard Lighthouse Open all Year Round?
Yes, 7 days a week.

Winter months – October 16th – April 30th – (10am-4pm) The grounds and washrooms are open, and when we visited during the week, there was no charge to enter.
Fisgard Lighthouse and Historic Buildings are open Saturday and Sunday only.

Can You Camp at Fort Rodd Hill?
Parks Canada offers a glamping style option for sleeping within the fort walls. With only five oTENTik Tents available running May to October, you might want to book fast. A local hot spot, the Stick in the Mud is a roastery and a popular place to grab coffee and treats in Sooke.
more >>
Vancouver Island
Adventure Map
Let's Go
Experience The Area 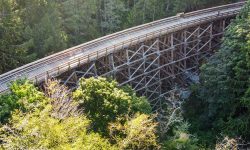 The Galloping Goose is an impressive trail for all ages and skill levels.
more info>> 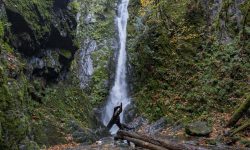 Land Acknowledgement:
We would like to acknowledge the land we appreciate daily within the 50 First Nations that make up the traditional territories of the Coast Salish, Nuu chah nulth, and Kwakiutl–the first peoples of Vancouver Island .